skip to main | skip to sidebar

A thought about her!

So well.. I've been thinking about something to post on this blog.. and to be honest the cool ideas always came to my mind around 2:00 in the morning. At that time, though, I had no intention to wake up to write them down. So unfortunately when I woke up all the ideas were gone.
I have to admit that what I'm about to write could sound so cheesy that's disgusting and it makes me wonder how this is possible since as an electrician I should be the technical guy that can express himself with no more than few words.. too bad that it's not my talent that. Anyway I just wanted to tell something about the great woman that everyone know as Claudia Peters (I told you it could be cheesy). She has the most sweet and loving personality ever. Every time I look at her pictures or I have the opportunity to see her, I just realize that I'm the luckiest guy on Earth. Truly no one else has the power to make me feel as happy as she does.
To quote a song by "The Police": "Every thing she does is magic". To me it really is.
With small and simple things she can always make me smile. I think of her as the greatest blessing I could ever receive. I am so glad that out of millions of guys on earth she chose me.
I had the opportunity to be with her when she came down to Italy this past May. I got to know her better and I can confess that there is no girl more loving than her. She is perfect.
She is the living portrait of all the features I ever wanted for my future wife.
I feel really comfortable around her. I am happy, but most important i feel loved.
It seems to me that we knew each other before this life. I am pretty sure that we were meant to be together.
She is just amazing!
Posted by Gabriele at 7:11 AM No comments:

i have always been interested in languages. i never really consider myself "good" at languages because i hate grammar. i like learning from listening and speaking rather than from case charts. which ultimately means that when i speak another language it isn't always going to be perfect. and i don't mind. today gabriele and i were talking about languages and i appreciated the fact that we think a lot alike in this subject. we both seem to have a certain amount of touchiness about it with a sprinkle of pickiness and pet peeves.
there's me in america where i think everyone who lives here should put forth an effort to learn english. there's him in italy where he thinks everyone who lives there should put forth an effort to learn italian. i'm generally very firm in my sentiments because my mother is mexican and from the beginning of her time here in america she made the resolve to learn english and speaks proficient, nearly impeccable english. she always spoke to us in english at home. some people think that could be wrong and that she should have taught us spanish. well, it didn't stop us from learning spanish at all. either way, my point is that my mom speaks the language of the country in which she resides. and i really appreciate that. it has taught me a lesson of respect.
i think a lot about these things because i will be moving to italy next year (maybe forever, maybe not). i intend to learn italian and speak to my children in italian. of course, i will help them in their studies concerning english. but in reality, if we live in italy, italian will be our primary language. not english. i don't consider that turning my back on america or something. to me, that just shows respect for the people in the place i will live. i'll always be american and make strawberry shortcake, just like my mom will always be mexican and make chiles rellenos.
i think that's a part people don't understand.nothing stands in the way of learning a new language. people use the excuse that they're too old or that circumstances for some reason don't permit it. i don't fall for that. my favorite professor at byu, walter whipple, learned polish when he was forty. he was then called as the first mission president of the poland warsaw mission. he has been chosen to translate traditional polish carols and is frequently invited to poland to play the organ at special events. you could say he's just brilliant. i say he cared enough to learn polish and then continued learning it as the years passed.
learning a language takes time and effort (and certainly pulls you out of your comfort zone). i dare to say that those who do not speak the language of the country in which they live care not to give that time or effort. which to me really causes these people to gyp themselves of their own potential to better communicate in the society they frequent daily.
Posted by Claudia at 12:34 PM 1 comment:

for the girls...what we call "details"

I was nice enough to h 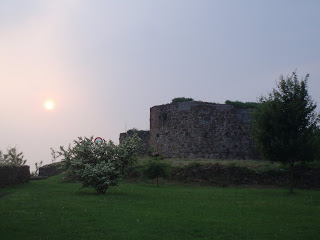 ave Gabriele write "our story." I requested that because, well, many things just sound better when he says them. They're at least more entertaining. Now I suppose it's my job to do the girly thing and write about the proposal.
To be honest, it wasn't a surprise, and it wasn't as if we hadn't already decided that our relationship was going to be permanent...but tradition calls for certain things to happen. Before I made the trip to Italy I wondered if I would come home engaged but didn't too much concern myself with it. I don't know if things happened the way I expected them to at all, but in the end I was happy anyway.
Gabriele took me to see this very old little castle on a hill that overlooks his town of Cormons, Italy. The view from there is amazing and so peaceful. Before approaching the actual structure there are several signs that read, "vietato salire sulla torre." Now, I understand some basic Italian, so I aske 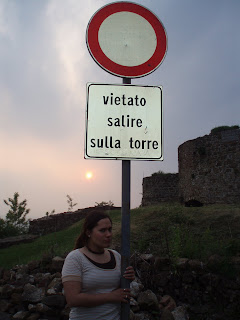 d Gab what that meant. He of course said, in a very suspicious manner, "I'll tell you later." I asked again, and insisted but got no answer, so we continued to the castle and climbed to the top and sat for a little while. Those signs actually told us that it was forbidden to climb...go figure. Either way, this was the location where Gabriele asked me to marry him. I, of course, accepted but we both discussed how it would be official when he gave me a ring.
So then I spent two weeks touring Italy, a little bit of Slovenia, and even Croatia (yay!). A few days before leaving for home we went ring shopping. I didn't really think I would be going home with a ring. To me this was just an opportunity to give Gabriele an idea of something I would like. For several hours I tried on many rings and did not like any of them. I felt bad for being so picky. On the way home I just turned to Gabriele and said, "Just forget the ring. I don't want one anymore." I think this really confused him and he wanted to know why I felt this way. So I told him what I felt, honestly, "I don't really need a ring. Engagement rings just seem like they're for show anyway. I'd rather put the money toward our house." I mean, seriously, I'll take a house over a ring any day. Well, he invited me to look at one more store. It was a really classy, small jewelry store in the center of Cormons. I immediately found 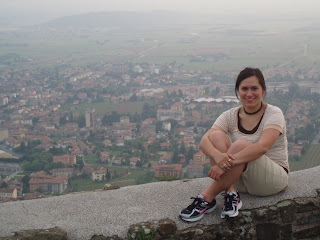 the best ring I had seen all day. So he got it for me. Then it was official! I didn't really think that would happen right then and right there. But it did. And I couldn't be happier. And I am really grateful for all of you, my friends, and your love and support. That makes everything more fun and exciting!
Posted by Claudia at 8:34 PM 1 comment:

So, well.. this is us..
of course you might ask how this thing happened..
well Claudia is a wonderful young woman from Chicago and Gabriele a guy from Italy.
You are about to read their story.. behold it can be cheesy..
These two handsome people met while on a mission in Croatia. Since then there was a great debate about who makes the best pizza in the world. Italy, or Chicago?
After arguing for many months, Gabriele decided to take a plane and fly to Chicago to prove to the world that Italian pizza is the best. So he flew over there and stayed for 2 weeks in Chicago, trying pizza several times. But Chicago pizza was not the only thing that made his heart beat.
As he came home, he realized that something in his life was missing.
Claudia.
They talked over the phone for hours and one day, as he was working, she made him super happy by saying that she was going to fly to italy to meet him.
Excited, on the 12th of may he picked her up at the Venice airport. In two weeks they had fun traveling around and getting to know each other better.
Finally one day, on may 26th he proposed to her. How sweet.
Now they look forward to the next year in preparation for their marriage. 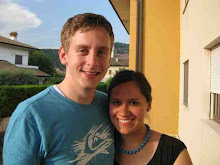 Who really has the BEST pizza in the world?